Seizing The Day With “Newsies”!

Newsies: a Disney classic and a Broadway smash! Not to mention a 2012 Tony Award Winner for best score and best choreography! Notorious for “the Newsie jump” and musical numbers such as “Seize the Day”, this musical swept Pittsburgh off its feet!

If you have never seen Newsies, it is “based on the real-life Newsboy Strike of 1899, this new Disney musical tells the story of Jack Kelly, a rebellious newsboy who dreams of a life as an artist away from the big city. After publishing giant Joseph Pulitzer raises newspaper prices at the newsboys’ expense, Kelly and his fellow newsies take action. With help from the beautiful female reporter Katherine Plumber, all of New York City soon recognizes the power of ‘the little man.'” It is an epic David vs. Goliath story that the whole family will enjoy!

But what makes a newsboy a “Newsie”? Jack Kelley might tell you it’s “sellin’ papes”, but James Allen Washington showed me all the answers.

Thanks to the Pittsburgh CLO Academy of Musical Theater for offering a “Newsies” dance master class, I was able to work with actor James Allen Washington (Sniper, Scab, Ensemble) and give insight into the extensive and intense dancing in Newsies. With a quick warm, up we were off learning the choreography straight from the stage! James Allan Washington gave every important detail of each number along with stories of his own personal experiences while he taught. Washington is a promising rising star. Believe it or not, this is only his fourth show! I can’t wait to see what he will do next!

During the question-and-answer session he was asked what someone older, who hasn’t been dancing since a young age, could do to improve their dance, James replied, “stretch, definitely take classes, and don’t let anyone tell you no.”  That answer lit the room with confidence and newfound inspiration!

After the question-and-answer session, we had a few minutes to primp before we headed to the gorgeous Benedum Center to watch James and the rest of the cast in action. Newsies is a show I have seen and listened to many times. But for the first time, I was able to truly connect with the characters and even cried at the end of the ballad, “Santa Fe”. Each character came to life with phenomenal realness.

The Pittsburgh CLO is a definite must-do if you are an actor visiting or living in the Pittsburgh area! Located in the cultural district of Pittsburgh, it offers theatre camps, all kinds of classes, master classes, and more. The CLO is a wonderful place to continue your theatrical training! I’m looking forward to my next visit!

If you haven’t been able to see the Newsies story for yourself, now is your chance! The filmed musical is returning to select cinemas Aug. 5th and 9th. See if it is coming to a theater near you here.

Congratulations to the cast of “Newsies” on a phenomenal run! 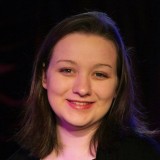