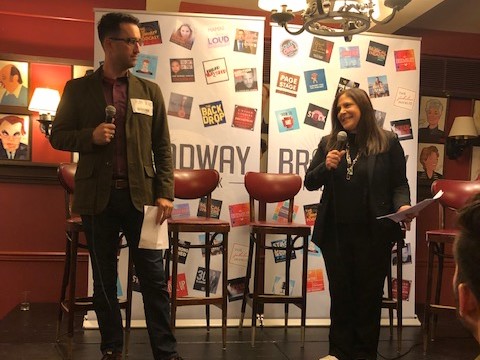 Hey, Camp Broadway fans! Did you hear the Big News?

We’re launching our first Camp Broadway Podcast: Develop Your Character, and it will be available today on the new smash-hit site for all things theater: the Broadway Podcast Network!

Camp Broadway’s Develop Your Character will be the very first BPN podcast dedicated to performing arts students and young performers, like you!

As we celebrate our podcast launch, let’s hear from the team who founded BPN, who—by the way—also want to hear from you! Check out the end of this post for ways to get your ideas for podcasts on the BPN airwaves!

So… as you probably know, podcasts are the perfect way to learn of the hot topics that Broadway is talking about. And the Broadway Podcast Network has you covered with a stellar lineup of theater industry hosts, plus super popular podcasts on theater-centric topics such as audition secrets, breaking into the biz, and chats with Broadway’s brightest stars.

BPN’s two founders, Dori Berinstein and Alan Seales created this centralized podcast hub as a digital home for the theater community’s storytellers—which makes sense since both of them are masterful storytellers, themselves.

Broadway Producer Dori Berinstein is a four-time Tony Award winner, whose most recent hit, The Prom, is currently being adapted for Netflix and will star Meryl Streep, Ariana Grande, and Keegan-Michael Key. Ms. Berinstein is an Emmy Award-winning director, producer, and writer for film and TV. She also co-founded Camp Broadway.

Executive Producer and CTO Alan Seales is a theater and technology maven, with experience acting, producing, and directing—as well as building websites, working as an engineer for Google, and heading Talks at Google.

I had the honor of speaking with Ms. Berinstein and Mr. Seales recently. Read on and catch their enthusiasm for theater podcasts!

CB: Both of you come from very successful backgrounds in theater: producing, directing, acting, writing, tech. So… how did you get into podcasts?

Dori Berinstein: I fell into podcasting as a commuter: listening to and loving the art of conversation. It’s a rare thing these days when people are lost in deep conversation about a particular topic, and I really love that and treasure it…. But I had trouble finding theater podcasts. We’re surrounded by amazing storytellers in our theater community: this is the perfect world to find conversationalists… and so, it’s the perfect community for a podcast network, which brings people who want to talk about theater together.

Alan Seales: Yeah, I was looking for content and couldn’t really find anything, either, so I created my own podcast…. But I realized that there were, literally, dozens and dozens of other theater podcasts that already existed—great content that people aren’t able to discover. So it seemed like a no-brainer to pull them all together in one place, where we can work together and complement each other, in terms of sponsorship and exposure. And podcasts are great: for me, being in New York, on the subway, they’re accessible and portable. Theater on demand!

CB: Did the two of you participate in the theater when you were in school? If you did—or didn’t—how did that shape you as a theater professional?

Alan Seales: I had a real interest in technology and engineering—but also grew up loving performing and the arts. My parents encouraged the engineering and computer side, and I got a computer science degree, but after that, I thought: ‘I’m gonna try to be an actor.’ But I wound up combining tech and performing. I supported myself by making websites for people, in addition to my Actor’s Equity weekly pay in regional theater. But I always wished I had a resource like Camp Broadway when I was younger. There was theater stuff I learned in my mid-to-late twenties that I wish I had learned in my mid-to-late teens.

Dori Berinstein: As a kid, I knew that I loved theater so much, from my earliest memory…. I auditioned for everything because I just wanted to be part of that community, but I wasn’t cast. And when I was growing up, there were no opportunities to be behind the curtain—to direct or produce or apprentice in any way— so it wasn’t until adult life that I got to be part of this community. If there had been a place like Camp Broadway when I was growing up, I would have been thrilled, because Camp Broadway was never about having to be really good from the start, it is about the love of theater, and just being a part of it. That would’ve been the perfect place for me—which was my incentive, along with Susan [Lee’s], to launch Camp Broadway.

CB: Do you have any advice for performing arts students hoping for careers in the theater?

Alan Seales: Basically, if you like doing anything, there’s a place for you in the theater. There are writers, directors, actors, producers, tech jobs… there are front-of-the-house managers, back-of-the-house managers, people who do the finances and budgets, people who maintain the staff and the payrolls, press agents, and marketing agents… So, really, my advice is: do a little research, dig into the podcast world, see what’s out there in terms of job categories. There are plenty of ways to be successful without ever making it to a Broadway stage. There’s regional theater. Community theater. Do you like reading music? Do you like composing? Be an instrumentalist. Do you like telling stories? Become a playwright. Start writing stuff down. Or be a lyricist. There are so many ways to do what you like in the theater. Just find your niche!

Dori Berinstein: Theater should be part of everyone’s life. If you can, go to the theater. Whether it’s Broadway, regional theater, local theater, theater at school…go. You know, I did a lot of work with Carol Channing. I made a film about her life. And I laughed when she always said: “Theater is fertilizer on the brain.” And I really agree with her! Theater helps you see the world in so many new ways. When you put on a show, you have your ‘theater family,’ and it’s an incredible experience. I look back and I think I was so right to want that and chase that, and it is everything I hoped it would be. And so, however you’re a part of theater, make sure it’s part of your life!

Dori Berinstein: What I love about what we’ve created with the Broadway Podcast Network is that there are so many voices! When you go to BPN, maybe you’re familiar with one podcast, but you very organically discover so many other different podcasts, and voices, and storytellers. There’s something for everyone. It’s like a one-stop-shopping place for everything theater!

And we’re putting together a bunch of new original content, too, that I really can’t mention yet—but go to BPN.FM and sign up for VIP notifications. There’s just so much good stuff there, and more good stuff coming!

I’d like to add that we want to make sure that we support podcasts for the Camp Broadway audience. What kinds of podcasts would you like to hear? Which podcast guests would be your dream guests? Engage with us, so that we can be sure that we’re creating content that would be exciting for you!

You heard it, Camp Broadway fam: The Broadway Podcast Network welcomes your suggestions and ideas! Please send them to: https://broadwaypodcastnetwork.com

Special thanks to Dori Berinstein and Alan Seales for this exclusive interview—and for collaborating with Camp Broadway to launch our Develop Your Character podcast on the Broadway Podcast Network!