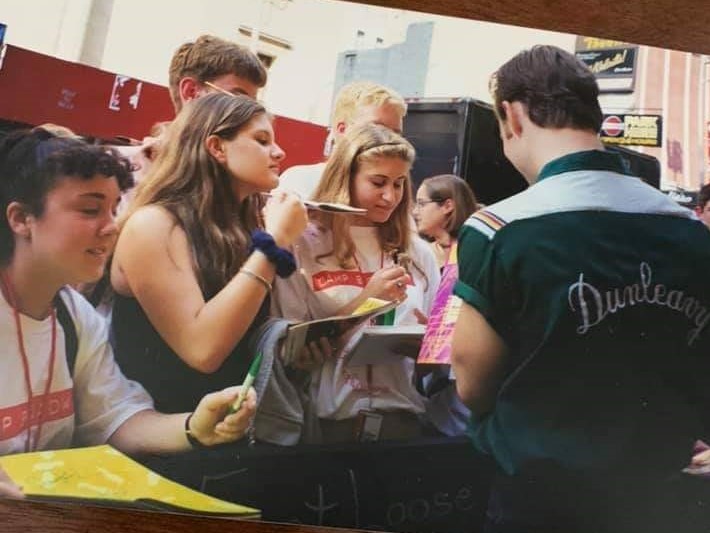 As a lifelong lover of musical theater, being a camper at Camp Broadway® as a teenager was a dream come true! Every session I would wait with bated breath to see what Broadway Stars would come to visit us at camp or sit in the audience to see our Family Finale performance. Back in the late ‘90s, I primarily learned about Broadway from performances that could be seen on talk shows and TV or learned insight from magazines, newspapers, and books. But nothing compares to learning about Broadway by going to NYC in person!

Just recently I visited my friend and cast-member of The Phantom of the Opera, Tug Watson. We hung out in the seats so long after the curtain came down security had to kindly ask us to leave. We ventured out the stage door to the street where Tug had theater loves waiting for him. I gladly took all the photos while he signed autographs. Tug uses Instagram and a few of his fans had written to him to say they would be at the stage door, so he was sure to go out and say hello.

This recent experience made me think back to when I was a kid and first learned about “Stagedooring”. I remember my excitement when I learned I could go stand outside the stage door of my favorite shows to meet my idols and even snap a picture?! Camp Broadway® introduced this idea to me; and from the ages of 12 to 17, I lived at stage doors with my autograph book, my mom, and her camera every time we went into Manhattan. I met Bernadette Peters, Sutton Foster and Craig Bierko to name a few. I would rush home and wait for the photos to develop so I could pair them up with my signed Playbill or autograph book. Since this was before the days of social media, I would mail letters with my pictures to my friends I made from camp. One highlight was when I recognized my camp counselor in Mamma Mia! That was cool!

It’s amazing to reflect back and see how this treasured ritual of Stagedooring has matured with the use of social media for sharing pictures and connecting with actors (like Tug’s fans were able to connect with him), yet continues to be a steadfast tradition and special moment for developing young audience members.

Nowadays, theater-lovers have lots of access to theatrical programming through the movie theater, YouTube, social media profiles of shows and performers, as well as digital libraries. But this whole world is something that Camp Broadway® had opened for me many years ago before all those resources were available. As industries and technology evolve, Camp Broadway continues as an innovative leader in theatrical experiences and providing unique programming for young theater-enthusiasts to access Broadway!

Want to read more about Stagedooring? Take a look at this Camp Broadway® blog post from 2013, “Stagedooring 101” reflecting on some Stagedooring pointers that still hold true in 2020.

Sunny Noelle Naughton is jazzed to be back with Camp Broadway overseeing Communications. An alumnus of the Mainstage Program, Sunny moved to NYC at 17 to pursue her dreams of working on Broadway, attending the American Musical and Dramatic Academy. After appearing in the Broadway National Tour of Annie (Orphan Swing) working with original creative team including Martin Charnin, Charles Strouse, Thomas Meehan and Bill Berloni, Sunny decided to go behind the scenes. While working as Program Manager at Camp Broadway with programs such as the Macy’s Thanksgiving Day Parade, The New York Pops Annual Birthday Gala and all Camp Broadway summer programs, Sunny graduated from Eugene Lang at the New School with a self-designed degree in Media & Journalism. Sunny has taken the last few years to obtain a Masters Degree in Organizational Leadership from Southern New Hampshire University. As a youth, Sunny’s dream was to spend all year long with Camp Broadway so she can genuinely say her dreams have come true!