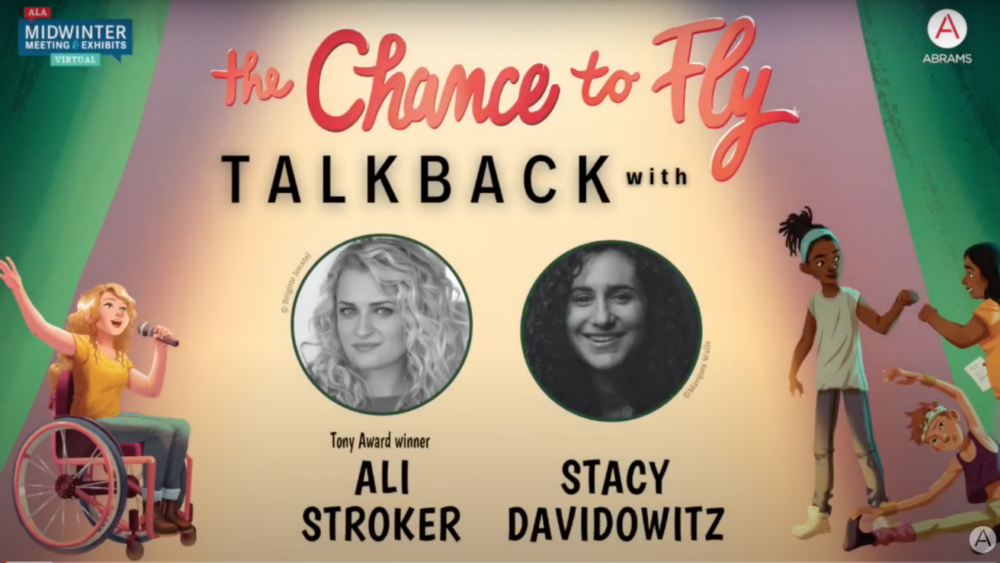 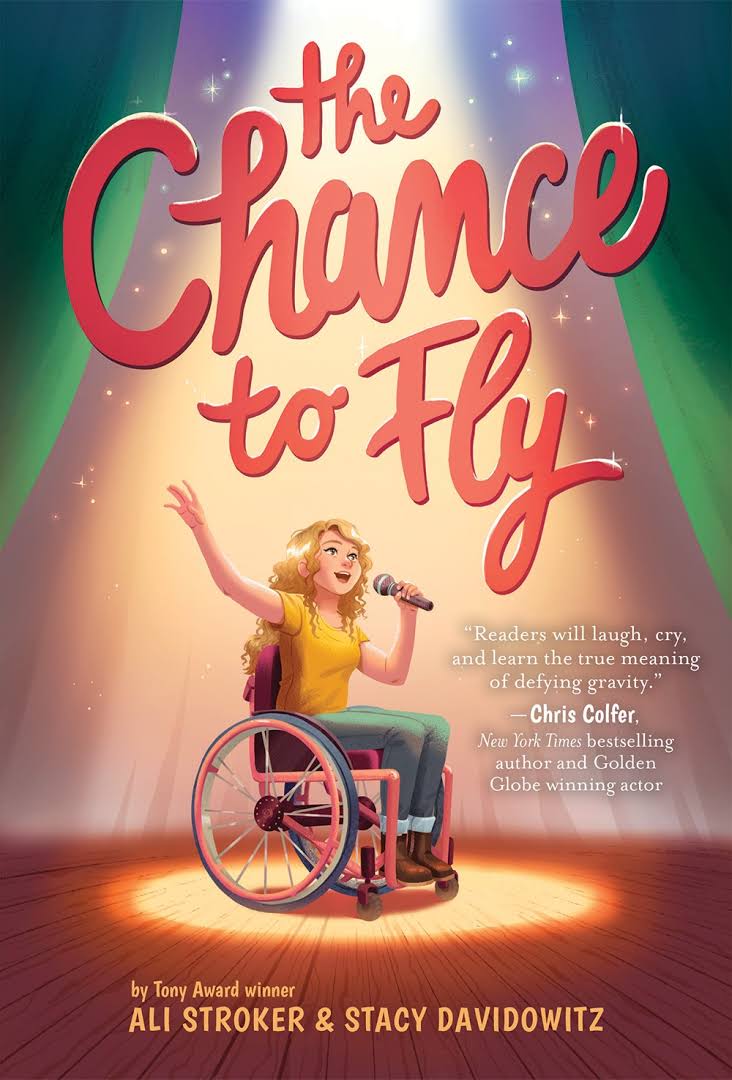 I have been binge-watching Ali Stroker on YouTube all week. Hold on. Ali Stroker is not a name in your cannon? Inconceivable! In 2019 she won the Tony Award for best actress in a musical. Talk about defying gravity! She’s in a wheelchair and incredible! TBH, I didn’t know who she was either until her amazing performance with her Oklahoma cast at the Tony’s that year. But now she is “part of my world.” Next month her debut middle grade novel written with Stacy Davidowitz, perfect for young theatre fans, will hit the shelves.

Theatre-loving 13-year-old Nat just moved from California to New Jersey leaving life with her BFF, Chloe, and her wheelchair racing world behind. When Dad drops her off for practice with a new racing team, she eyes a flyer announcing auditions for Wicked, her second favorite show only after Hamilton, at the JCC across the street.  The next day she skips a practice, heads over to the Center, and ultimately lands a role; her first-ever! Instant friendships, a crush, drama with Savannah, the lead, misunderstandings with Chloe, an adorable dog aptly named, Warbucks, an unexpected fire, karaoke, Pinterest cupcakes, an overabundance of Broadway references (especially Hamilton with a special shout out to my personal number from the play, “Dear Theodosia”) that only the serious theatre lover will appreciate…I wasn’t surprised when I smiled often and got “Defying Gravity” stuck in my head, but that moment that I shed a tear kind of threw me.

Group chats between the Broadway Bounders theatre kids are a big part of the book.  I absolutely LOVE all their names, each referencing a show or song.  Nat’s is “NatThrowinAwayMyShot.” How can you not love that? Do the promotional items for the book include a t-shirt or a sticker for my computer with the chat names? Speaking of swag, I wonder about a playlist.  I thought about it too late into the book but started making my own “Chance to Fly” on Spotify.  Please don’t judge me.  I tried to pick songs I could remember from the book and also just my favorites. What would Nat’s playlist look like? And while you are cueing up songs, make sure the Wicked soundtrack is ready, especially for the end.  My chills were literally multiplying during that part.

Dear theatre gods can you please let Ali and Stacy know that I have an Annie story to tell, too, and would love to hang out and be their friend (I’ll let it go that Stacy doesn’t spell her name correctly). When I was in 4th grade, I was Miss Hannigan. I know! Kind of unbelievable considering the source lol. It was the only lead in a play I ever got.  I wasn’t in it 17 times, but we can still be friends, right? PLUS–Ali and I share a birthday! So one a birthday and one a name. The three of us were meant to be!

Check out this video with Ali and Stacy. It’s 30 minutes long but worth it!

PS: This was one of those “G-d-I-Hope-I-Get-It” moments and I did! I’m the “Chief Bibliophile” for Camp Broadway’s Rialto Readers book club! Although we are still in our infant stage, it’s going to be big! Readers can sign up here.  I’ll be curating lists filled with books like Chance to Fly and so many others that kids like Nat and her Broadway Bounders friends will love. (PPS: Ali is a Camp Broadway alum–It was all meant to be!)

Stacey Rattner is a distinguished K-6 school librarian at Castleton Elementary School in upstate New York and the author of the popular blog, Librarian Leaps. She has many passions. More than anything, Stacey loves getting kids excited about reading. A native of Queens, Stacey is equally enthusiastic about Broadway. To this day, she is proud of her stage debut starring role as Miss Hannigan in her 4th-grade production of Annie. Since then she has been a regular theatergoer and a committed supporter of talented authors and artists.

Camp Broadway is delighted to give Stacey our stage to promote great classic works and wonderful new books to young readers as the Chief Bibliophile of Rialto BookClub. A bibliophile is “a person who collects books or who has a great love of books.” Stacey embodies this description. We are thrilled that she will bring her expertise as a librarian and her love of the theatre to our national book club members.