Blog
Camp Broadway / BlogPost / GO GO to Head Over Heels on Broadway… Because It’s Got the Beat!
Dec 13

GO GO to Head Over Heels on Broadway… Because It’s Got the Beat! 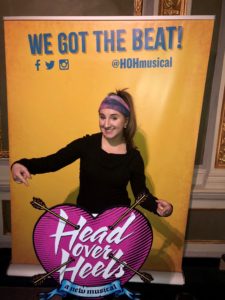 If you are looking for a hilarious, exciting, relevant show with both incredible dancing and singing, then you need to go see Head Over Heels right now! This musical is very empowering to watch because it promotes self expression, self love, and self acceptance! Not to mention, it is a hilarious comedy and the Go Go’s music had me dancing in my seat the entire show! The story also takes place during the Renaissance, which I loved. I was certainly head over heels for Head Over Heels! 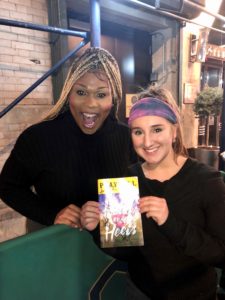 The storyline follows the love lives of the main characters, each one overcoming obstacles along the way in order to find their love. The snake, Pythio, guides the lovers and helps them accept themselves for who they are. Besides the amazing dancing, the highlight of the show was Pythio, who was played by Peppermint, the first transgender woman to originate a principal role on Broadway! I loved seeing her represented on the stage! Her character, Pythio, promotes self expression and self acceptance, helping the characters become comfortable with loving who they love. Watching this play out on the Broadway stage made me so happy. I wish everyone could learn to love themselves and each other for who they are! The “be yourself” message certainly inspired me and the audience. During intermission, I felt the loving energy throughout the theatre as I sat in my seat. The empowering message of Head Over Heels was already inspiring this audience! The great impact that theatre has on people is truly amazing, and this show certainly impacted this audience. 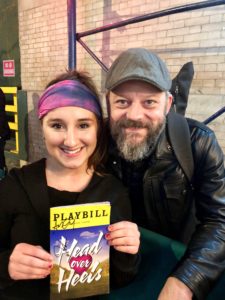 During Act two, I became aware of some creative symbolism. The purpose of Head Over Heels taking place during the Renaissance was because renaissance means “rebirth” in Old French. The society in the musical goes through a rebirth itself at the end of the show when a new open minded ideology sweeps over the kingdom. It was also exciting to see Rachel York play Gynecia because a few years ago, I performed at Carnegie Hall with her thanks to Camp Broadway! Overall, the show is powerful, hilarious, inspiring, and empowering. The music is also extremely catchy, so I’m going to go listen to the soundtrack of Head Over Heels right now!

After the show, I went to the stage door to meet the cast and ask them a few questions!

What is a message that you hope people take away from seeing Head Over Heels??? 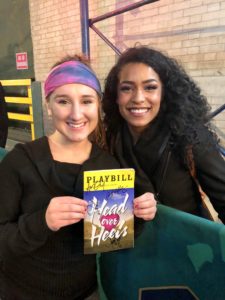 Jeremy Kushnier : “This is a message of acceptance, I think that we live in hard times right now politically, and it’s more important now than ever to live and let live, and love is love is love!.”

Bonnie Milligan: “Accepting who you are, your true authentic self is what leads to happiness and accepting that in others. The world needs to be more inclusive, that is beautiful and brings joy”

Taylor Iman Jones: “That Love is love, and acceptance is within all of us…all we have to do is love each other.”

What is the best advice you have ever received? 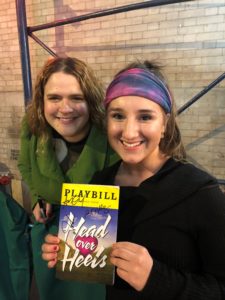 Head Over Heels concludes its Broadway run on January 6 so get tickets now at http://headoverheelsthemusical.com.

Head Over Heels was named a 2018 TOP 10 Pick from Entertainment Weekly!

Thank you to Eric Gelb, co-producer of Head Over Heels, for setting us up to review this amazing show. Eric is a Camp Broadway blogger who now attends NYU’s Steinhardt School for Culture, Education, and Human Development for educational theatre. Stay tuned for a look at NYU’s Legally Blonde, which Eric directed. With Eric’s talent, drive, and initiative, not to mention his beaming personality, we know he will go far in the theatre world and we are looking forward to seeing what he does next!